Co-operatives are set up for the benefit of their members – be they shoppers in a consumer retail co-op, employees in a workers’ co-op, tenants in a housing co-op or savers and borrowers in a credit union.

*stakeholders can be described as: ‘individuals or groups that can affect or be affected by an organisation. Stakeholders can come from inside or outside the organisation. Examples include customers, employees, members, shareholders, suppliers, non-profit groups and the local community, among others’.

The multi-stakeholder co-operative model addresses a multiplicity of stakeholder interests and turns it into a strength and greater sustainability for the co-operative.

Picturetank – a Société Coopérative d’Intérêt Collectif (or SCIC) – is based on the photographers’ co-op Magnum, formed at the close of WW2 with the radical idea that the photographers (rather than the publications themselves) should hold copyright control of the images. However, Picturetank goes a step further with the involvement of all workers as well as photographers and outside supporters in a multi-stakeholder model.

Starting up with 15 photographers and a single web designer, the co-op hosted, managed and published their work through their website, Picturetank.com. As the organization rapidly grew to 100 photographers, clients began requesting commercial services such as marketing and management of sales, so they began to recruit more staff and offer more services, adopting a more organized, business-like approach. However, as they grew, founders were reluctant to give up the democracy and inclusiveness they had enjoyed since the co-op’s early days.

One of the main balancing acts that Picturetank must perform every day is between the needs of the individual member photographers and the needs of the agency as a whole. Picturetank’s founders wanted to provide a platform for affiliation, but stop short of full integration—they did not want to impose group standards or requirements on the artistic work of any one individual photographer.

“Co-ops reflect the triumph and struggle of democracy. Disagreement and conflict are as much a part of democracy as the power of collective action. Managing disagreement and resolving conflict in a productive fashion are part of crafting an effective democracy. While everyone knows the consequences of destructive conflict, the advantages of constructively managed conflict include greater understanding, enlightenment, and consensus.”  – from ‘Solidarity as a business model’ Co-operative Development Center, Kent State University, USA

Membership of a multi-stakeholder co-operative is organised in two or more stakeholder groups which might include consumers, producers, workers, volunteers or general community supporters. So rather than being organized around a single class of members, multi-stakeholder co-operatives have a more diverse membership base.  This means that the co-op’s mission – their reason for existing, can be broader than that of a co-op with just one class of stakeholder, and will recognise the interdependence of interests of stakeholders.

But how is it possible to reconcile the inherent conflict of interest between workers, for example, who we may assume will want the highest wages for their hours worked, and consumers who will be looking for lower prices?

If we look at one example of a single stakeholder model – the credit union, it’s clear that this happens every day, because while attempting to meet the needs of their members, credit unions must address the conflicting interests of borrowers who are looking for low interest rates and savers who want higher interest rates.

Multi-stakeholder co-operatives however celebrate a diversity of interests in the short term, and common needs in the long term, whilst recognizing their interdependency.

In Quebec, such cooperatives are called ‘Solidarity’ cooperatives specifically to highlight this organisational structure which emphasizes commonalities rather than focusing on differences. 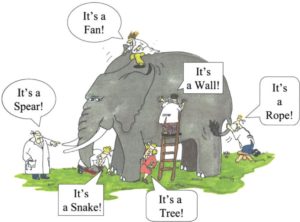 We could contrast single stakeholder with multi-stakeholder co-ops in a scenario like this one of blindfolded people touching different parts of the elephant and finding that it’s like a fan, a spear, a tree, a rope or a snake. Each of them can only understand their own situation, and can’t see the big picture. We sometimes fail to recognise the interdependency of the different roles we play in the economy – I am a worker but I am also a consumer. Like I am a car driver (occasionally) but also a cyclist and a pedestrian.

Multi-stakeholder cooperatives by their nature seek out different information and new perspectives. But to be successful they also need to know how to share this information in ways that make it meaningful to members of the other groups. Co-operative skills – knowing how to communicate well, running effective meetings, understanding different approaches to taking decisions, knowing how to cope with the day to day conflicts and how to avoid unnecessary ones – these skills are essential for all co-ops, but especially so for multi-stakeholder co-ops.

Some of the examples we looked at in a recent workshop run by Cooperantics with Stir to Action included – along with Picturetank – multi-stakeholder co-operatives from a wide range of economic sectors:

GO-OP Co-operative was founded in 2009 as a multi-stakeholder co-operative based on the Somerset Rules. Its aim is to reduce the social and environmental impacts of travel by providing mutually owned, high quality and inclusive public transport services that encourage people to choose more sustainable options. Its ambition is to be the first co-operatively owned train operating company in the UK.

Weaver Street Market was founded in Carrboro, North Carolina in 1988, and has since become the largest retail multi-stakeholder cooperative in the United States, with 18,000 consumer households and 200 employee owners. It runs three grocery stores, a restaurant and a food production facility. This successful multi-stakeholder co-operative is owned and governed by consumer and worker members.

Webarchitects is a multi-stakeholder co-operative, with membership from clients, partners and investors as well as workers. It was set up in 2011 to provide internet based services for socially responsible groups and individuals. The co-op uses free open source software wherever possible, and aims to minimise fossil fuel usage and ecological impacts and provide sustainable employment.

Much inspiration for this blog was found reading the excellent guide to multi-stakeholder co-operatives produced by the Co-operative development Center at Kent State University in the U.S.: ‘Solidarity as a business model’. Highly recommended if you’d like to know more.